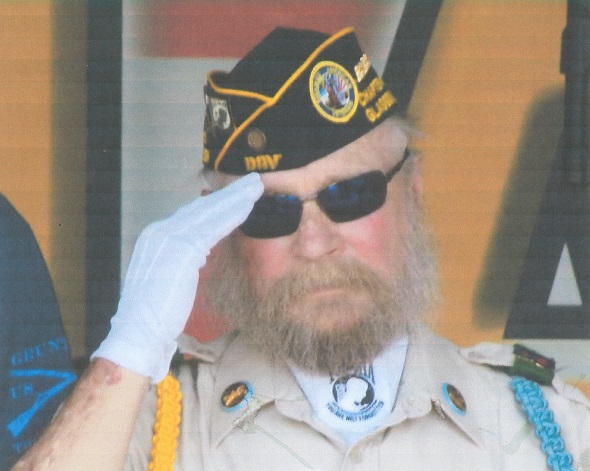 Bruce Lee Wilcoxson, age 72 of Canmer passed away Thursday, June 24, 2021 at T.J. Samson Community Hospital. He was born November 24, 1948 in Lincoln, IL to the late Carl R. Wilcoxson and Carol R. (Oller) Wilcoxson. He was a 1966 graduate of Easton Communty High School, Easton, IL and later went on to continue his education at both Canton Junior College in Canton, IL and DePaul University in Chicago.

He proudly served in the U.S. Army from 1969-1973 including tours in Germany and Vietnam.

He held many and varied jobs over the years starting on the family farm and working for other area farmers, sometimes ending his days with the closing shift at Knuppel’s Gas Station. He worked as a fry cook in Canton, IL at Caterpillar in Peoria, IL, the maintenance manager at a high rise apartment complex in San Francisco, CA, at KFC and as part owner of a dog training school in Kentucky, the Railroad Retirement Board in Chicago and spent the bulk of his time as a computer programmer/ analyst in Springfield, IL. It was obvious that there wasn’t a job that he wouldn’t at least give a try. After retirement he worked at his favorite job, being a part time marshal at the Crane Creek Golf course. “Hey you, get that cart off the green!”

While working in Chicago he met his future “Mrs. Wilcoxson” Eva Furimsky. They were married on November 3, 1984 and would have been celebrating their 37th wedding anniversary this year.

In 2011 he fulfilled his life long dream of returning to his “Wilcoxson” roots and moved to Kentucky onto his little piece of KY heaven.

He loved all things outdoors including hunting, fishing, golfing and his favorite, morel hunting, which he was still able to do this spring.

He spent countless hours serving in the honor guards of the VFW Post #6408 in Havana, IL and the DAV Chapter #20 in Glasgow, KY, where he was serving as Commander of the guard before his passing. He considered it his privilege to be able to honor each and every one of his brothers and sisters in arms with  the final salute that they so richly deserved. He was honored to receive the “Patriot of the Year” award from the Barren County Veterans Association less than four weeks ago. He was also a current member of the VFW post 6281 in Edmonton, KY and a member of the Freedom Warriors Veterans Organization.

In addition to his wife, he is survived by his brothers, Carl (Carolyn) Wilcoxson of Knoxville, IL, Aaron (Patricia) Wilcoxson of Easton, IL and David Wilcoxson of Pekins, IL; his mother-in-law, Martha Furimsky of Mokena, IL; his sister-in-law, Amy (Bill) Scheel of Nekoosa, WI; his brothers-in-law, Andy (Betty) Furimsky of Mokena, IL and Edward Furimsky, of Evergreen Park, IL; his special daughter, Cathy (Roger) Passmore of Farmington, IL; his grandsons, Kash McKeever and Alex Wilcoxson; his great-granddaughters, Alivia, Brogen and Delilah. They came to see him on Memorial Day weekend and he held that visit in heart until the end and beyond. He is also survived by a host of nieces, nephews an cousins that he was so proud of. He wouldn’t want to forget his “brother from another mother” Ernie (Martha) Wagoner. He would also like to give one final salute to all of his brothers and sisters of the DAV, VFW and Freedom Warriors Veterans Org., he loved you all.

In addition to his parents he was preceded in death by his only child Bruce L. Wilcoxson, Jr. who died in 2014. Only ten days before his passing he lost his oldest and dearest cousin, Adelia (Wilcoxson) “Granny Dee” Overfelt.

Per his wishes, Bruce will be cremated and a celebration of life will be held at a later date.

Condolences may be expressed online at www.winnfuneralhome.com

A service summary is not available

Plant a tree in memory of Bruce Lee Wilcoxson

My condolences to the Wilcoxson family. Loss is not easy, no matter the situation.

Eva:   All of us here and Knuppel and Lindner are so sorry to hear of Bruces' death.   We all hope the best for you in this difficult time.   Bill K.

So very sorry!!! He was one of my special cousin and will be missed dearly. “ Hey cousin “ one last time. Love you!

A Memorial Tree was planted for Bruce Lee Wilcoxson

Plant a tree in memory of Bruce Lee Wilcoxson